The old-timers remember the way it used to be: dirt roads, no electricity, a small and short-lived city created by the construction of a dam. Now they see a thriving city in an urban setting with an excellent quality of life.

Coon Rapids traces its founding as a separate government entity back to July 30, 1857 when Anoka Township was organized. The city retains these same boundaries with the exclusion of the City of Anoka which was incorporated as a separate city. 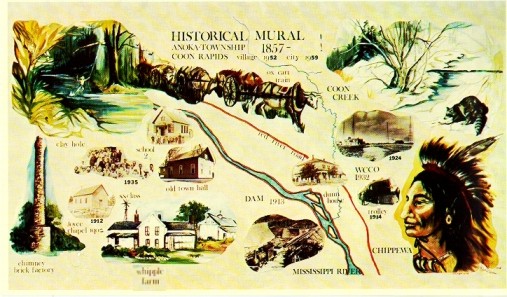 When the federal government surveyed the area in 1847, it found a well-traveled road running through Anoka County. The road was laid out in 1835 for military use and may be the oldest road in this part of the country. In 1843, trade was established from St. Paul to Pembina in the Red River Valley by Norman W. Kittson and the road then became part of the famous Red River Ox Cart Trail. The trail closely followed the present East River Road / Coon Rapids Boulevard alignment.

Agriculture was the 1st industry in the Coon Creek area, with farms ranging in size from 90 to 600 acres. In 1881, Dr. D.C. Dunham organized the 1st brick yard which was located near the old City Hall site and was known as the Anoka Pressed Brick and Terra Cotta Company. It represented the 1st non-agricultural industry in Coon Rapids. A legacy left by that brick industry is still visible today and is known as the "Clay Hole".

In the summer of 1898, the Great Northern Development Company proposed to build a dam below the Coon Creek Rapids with a power generating plant on the east side of the river. The actual construction did not start until 1912. Within 1 year, a small city had sprung up on the shores of the Mississippi River. Streets were laid out and roughly graded. The city's population grew to over 1,000 with laborers and engineers working on the dam. The dam was built by the Mississippi Power Company and was operating by 1914. Northern States Power Company ran the dam until 1969. It was acquired by the Hennepin County Park Board and serves as Coon Rapids Dam Regional Park today.

Becoming the City of Coon Rapids

With the coming of the dam, Anoka Township took on a new name: Coon Creek Rapids. Over the years, Coon Creek Rapids was shortened to Coon Rapids. In July 1948, an election was held in an attempt to incorporate the Township of Anoka as the village of Coon Rapids. The idea was initially defeated but eventually passed successfully in October 1952. In keeping with the progressive nature of the community, the voters went to the polls in November of 1957 and change the form of village government to the Council / Manager plan. In June 1959, the Village of Coon Rapids became the City of Coon Rapids.